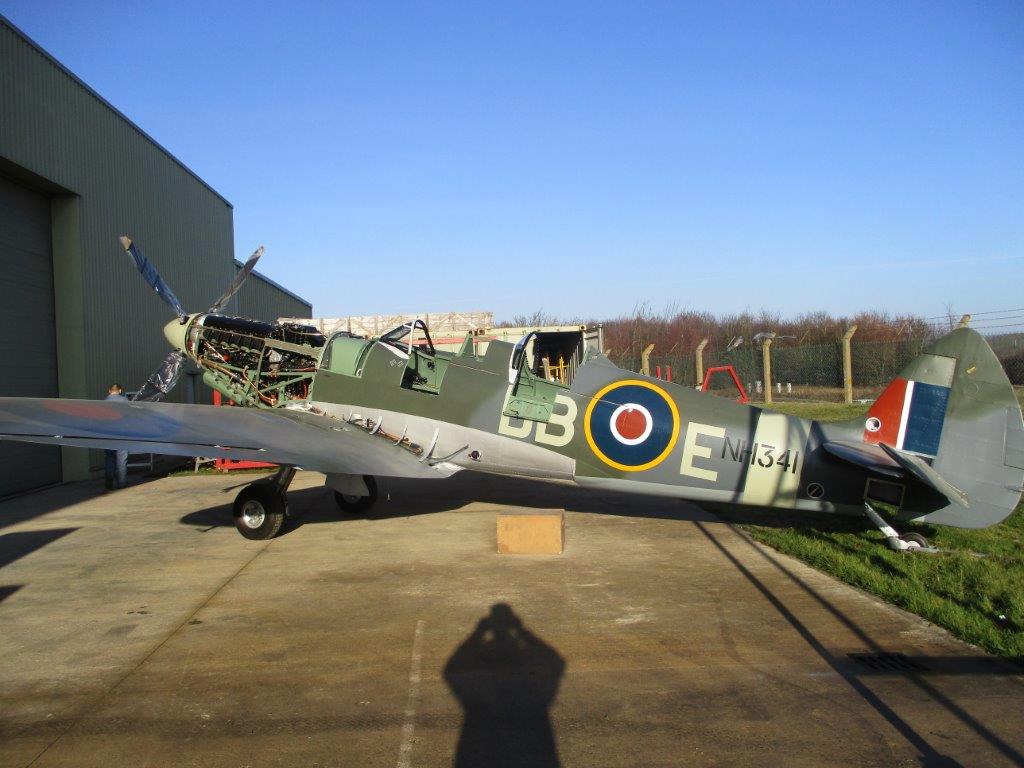 World War 2 Spitfire Restoration update #28. The latest update on the restoration and conversion of the Aero Legends Spitfire NH341.

The wings are now finished.

The engine cowling rails are now finished and fitted. Work continues with the underside fairings and leading edge ‘D’ fillets.

The fuselage electrical system is almost complete. The main battery relay and the mounts for the avionics equipment have been installed. Work has now started wiring the engine bay. The fuel tank has been fitted and all associated pipes and controls attached. The starboard radiator and intercooler have been fitted and all the pipes connected. The engine breather has been made and fitted. The exhaust fairings and exhausts are attached.

Undercarriage retractions have taken place. The brakes pipes have been made and the gear doors have been fitted and trimmed in.

Engine ground runs will have taken place. Cowlings will be in work.

World War 2 Spitfire NH341 was built at Castle Bromwich as a Spitfire Low Level Fighter (LFIXE) and delivered to 8 MU on the 28th April 1944. It was sent to Miles Aircraft for modifications to be fitted before delivery to 411 (Grizzly Bear) squadron RCAF on 22nd June 1944. This was the only squadron NH341 served with and was flown by several pilots the most notable use of NH341 was in the hands of Flt Lt Hugh Charles Trainor who gained his third kill in 48 hours on 29th June 1944 when he downed an ME109 five miles West of Caen whilst flying her. Flt Lt Trainor destroyed another BF109 on the evening of 30th June 1944 over Thury Hurcourt, again in NH341. Flt Lt Trainor gained ace status later flying another World War 2 Spitfire when he destroyed two more BF109s in a single flight on the 4th July, this was after NH341 had been lost on the 2nd July whilst being flown by Warrant Officer James “Jimmy” Jeffrey who escaped unscathed after tangling with FW190s South East of Caen.