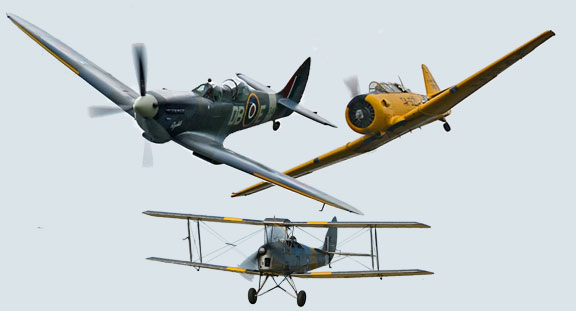 Take the controls of the de Havilland DH.82 Tiger Moth and follow the first training stage of WW2 Spitfire pilots.
The Tiger Moth is a classic 1930’s open cockpit biplane. The majority of the R.A.F.s pilots learnt to fly in her before progressing to such types as the Spitfire, Hurricane, Lancaster, Sunderland etc. There are only a small number of Tiger Moths that remain fully certified for trial flights and therefore this represents a rare opportunity to undertake a flight in one of these classic aircraft and experience what it was like to be an RAF Spitfire Pilot trainee in the Second World War.

Take the controls of a T6 Harvard and follow the second stage in the training path of a WW2 Spitfire pilot.
The Harvard is a single-engined advanced trainer aircraft used to train pilots of the United States Army Air Forces (USAAF), United States Navy, Royal Air Force and other air forces of the British Commonwealth during World War II and into the 1970s. The Harvard is much more powerful than the gentle Tiger Moth used in the first stage of RAF Spitfire Pilot training. It is a sturdy all metal aircraft with a retractable undercarriage and 600 hp PW radial engine which makes it much more like a fighter to fly and therefore the ideal trainer for an aspiring fighter pilot.

FLIGHT 3. Fly In A Spitfire

A unique once in a lifetime opportunity to experience 40 minutes in a Spitfire Trainer, a very rare and unique experience, made even more amazing when you’re flying in an actual Spitfire used during WW2 combat. During your flight you will experience the sights, sounds and smells of the cockpit during flight and communicate with your pilot, viewing the skills and techniques it takes to fly such an historic aircraft.

Aero Legends staff greet you at the Aero Legends main reception and proceed with your check-in. Sywell and Headcorn Aerodromes both have free parking and good facilities. With excellent viewing areas of the runway, a café and licensed bar, we encourage your family and friends to savour the atmosphere and share your day. Your day commences at 9am with a flight briefing where you will receive all the practical safety information required.

Our de Havilland DH.82 Tiger Moth was the principal type used in the British Commonwealth Air Training Plan where thousands of military pilots got their first taste of flight. The RAF found the Tiger Moth’s handling ideal for training future fighter pilots. A robust little machine, it is generally docile and forgiving in normal flight. The Tiger Moth responds well to control inputs, and is fairly easy to fly for a tail-dragger. Its large “parachute” wings are very forgiving, and it stalls at a speed as slow as 25 knots with power. The Tiger Moth’s biplane design makes it strong, You will be in constant communication with your instructor through your flying helmet. The instructor will handle the take off and landing – at their discretion you will be introduced to the flight controls during flight.

Our Harvard is an American built and designed two-seater trainer, a monoplane with a good deal more powerful engine than that of the Moth. It shares some of the characteristics of a fully fledged fighter aircraft. In it the RAF trainee pilot was moved from the simple aerodynamics of the Tiger Moth to the more demanding performance resembling that of a Hurricane or Spitfire.

Just like an RAF Spitfire Pilot Graduate, you will be in constant communication with your instructor through your flying helmet during your trial lesson. The instructor will handle the take off and landing – at their discretion you will be introduced to the flight controls during flight.

Our Mk IX Supermarine Spitfire (NH341) was built at Castle Bromwich as a Spitfire Low Level Fighter (LFIXE) and delivered to 8 MU on the 28th April 1944. It was sent to Miles Aircraft for modifications to be fitted before delivery to 411 (Grizzly Bear) squadron RCAF on 22nd June 1944. This was the only squadron NH341 served with and was flown by several pilots. On the 29th of June 1944 NH341 downed an ME109 five miles West of Caen. NH341 destroyed another BF109 on the evening of the 30th of June 1944 over Thury Hurcourt, again in NH341. However, by the 2nd of July NH341 had been lost. Warrant Officer James “Jimmy” Jeffrey 411 Squadron – was flying a morning patrol in NH341 on the 2nd July 1944 when he was engaged by FW190’s of JG26 South-East of Caen. W/O Jeffrey was shot down, but he baled out and successfully evaded capture, returning in late August. The Aero Legends Spitfire NH341 Code DB-E has been restored and converted to a dual cockpit T9 version by the experts at Historic Flying Ltd (HFL), Duxford.

Aero Legends Fly In A Spitfire is a unique once in a lifetime opportunity, flying in an actual Spitfire used during WW2 combat.

Your Ultimate Spitfire Experience will be filmed throughout your Spitfire flight. The Spitfire has an advanced HD cockpit video system with intercom audio installed. You will be given the memorable footage at no extra charge. HD Cockpit video footage is usually available for the Tiger Moth and Harvard as a chargeable extra. Spectators and family members can take photos and videos from the ample viewing areas assigned in safe positions at each aerodrome.