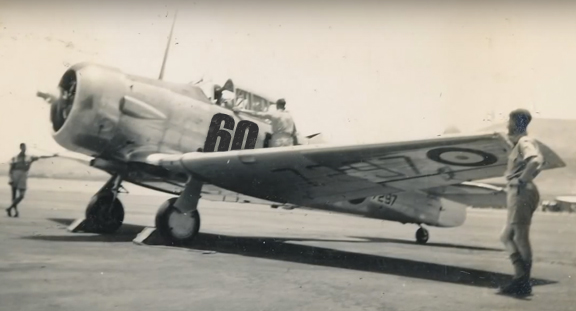 Take the controls of a T6 Harvard and follow the second stage in the training path of a WW2 Spitfire pilot – no previous flying experience required!
The Harvard is a single-engined advanced trainer aircraft used to train pilots of the United States Army Air Forces (USAAF), United States Navy, Royal Air Force and other air forces of the British Commonwealth during World War II and into the 1970s. The Harvard is much more powerful than the gentle Tiger Moth used in the first stage of RAF Spitfire Pilot training. It is a sturdy all metal aircraft with a retractable undercarriage and 600 hp PW radial engine which makes it much more like a fighter to fly and therefore the ideal trainer for an aspiring fighter pilot.

Arrival
Aero Legends staff greet you at the Aero Legends main reception and proceed with your check-in. Sywell and Headcorn Aerodromes both have free parking and good facilities. With excellent viewing areas of the runway, a café and licensed bar, we encourage your family and friends to savour the atmosphere and share your day. You will need to arrive 30 minutes before your flight to meet your instructor and take a short flight briefing where you will receive all the practical safety information required.

Your Aircraft
The Harvard is an American built and designed two-seater trainer, a monoplane with a good deal more powerful engine than that of the Moth. It shares some of the characteristics of a fully fledged fighter aircraft. In it the RAF trainee pilot was moved from the simple aerodynamics of the Tiger Moth to the more demanding performance resembling that of a Hurricane or Spitfire.
Just like an RAF Spitfire Pilot Graduate, you will be in constant communication with your instructor through your flying helmet during your trial lesson. The instructor will handle the take off and landing – at their discretion you will be introduced to the flight controls during flight.

Photography and video
Your RAF Spitfire pilot graduate experience in the T6 Harvard will be filmed throughout your flight. The front and rear facing HD cockpit video footage with intercom audio is available as an optional extra. Spectators and family members can take photos and videos from the ample viewing areas assigned in safe positions at each aerodrome.