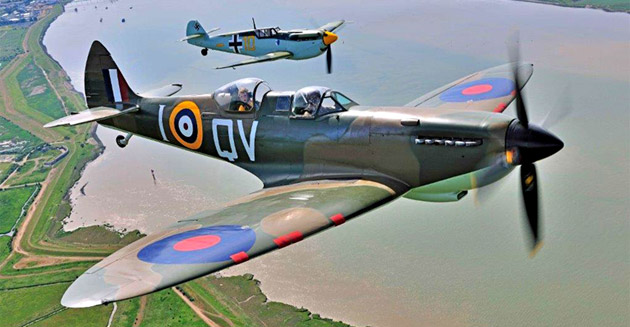 The setting is Goodwood Aerodrome  – during the last war known as RAF Westhampnett. You really couldn’t have a more authentic and atmospheric place from which to hold this event!

As a satellite station it was active from July 1940 during the Battle of Britain and home to 43, 129, 145, 602 and 610 Squadrons, operating Hurricanes, Spitfires, then later P-51 Mustangs.  After the war, the airfield’s perimeter road was converted into a racing circuit, which is where the legendary Goodwill Revival meeting is held annually.

In 2014, we present the unique opportunity to fly with a Spitfire and ME ( Buchon) 109. Comfortably seated in our executive observation aircraft, a nine seater Piper Chieftain, you’ll be thrilled to see first of all Spitfire Tr9, ‘ The Boultbee Spitfire’ flying alongside, and then out of the other side of the aircraft you’ll see a ‘109’ nestle up alongside … a startling vision seventy four years ago – in 2014 it seems surreal!

As the flight takes off, the vista of the Solent will appear and the flight will either proceed to either the Isle of Wight , with a circuit around the island, or alternatively we’ll fly down the coast to Beachy Head and back. The choice of route will depend on the weather and operational conditions at  the time.

During your flight we will showcase the aircraft, presenting each such that you get those remarkable photographs that Action Stations customers have become used to  – we position the aeroplanes in between you and the scenery below, and all you have to do is press the shutter! 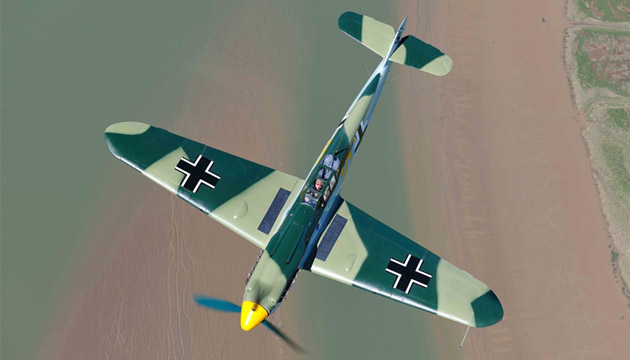 For the enthusiast there has never been such an opportunity before to photograph these two aircraft together  – flying within strict safety guidelines , we will manoeuvre them to show their agility and performance in the air, so that you can see why they were considered such formidable fighting machines.

Once back on the ground, you will have the opportunity of viewing each aircraft, photographing them, and you will also be able to sit in the Spitfire cockpit.

Meeting the pilots and crew who so lovingly fly and look after these iconic machines, will round off what will probably the most memorable aviation experience of your life.

Each flight is 40 minutes duration (chock to chock) and includes 30 minutes flying time with chosen aircraft.