Spitfire history for NH341 is starting to piece together. Those fine chaps at Aircrew Remembered had contact in April 2016 from the son of Warrant Officer James "Jimmy" Jeffrey 411 Squadron - who was flying a morning patrol in NH341 on the 2nd July 1944 when he was engaged by FW190's of JG26 South-East of Caen. W/O Jeffrey was shot down, but he baled out and successfully evaded capture, returning in late August. 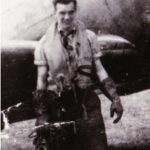 "I am the son of Warrant Officer James"Jimmy" Jeffrey 411 Squandron, 126th Wing RCAF.

We are especially grateful to our French friends and the families of Normandy who risked their lives to save our airmen. For that, we will always be in their debt.

The whole family went to Normandy in 2002 and retraced my father's steps through France. My dad passed away in October of 2005. I am the only child, my mother Jean, is still alive at 92 years, I am married to Jocelyne Bangs and we have 2 daughters, Denise and Julie.

Jim's sortie originated from B.3 airfield occupied by 126th Wing RCAF located at Beny-sur-Mer, July 2nd., 1944. I know he was scrambled very early in the morning in a flight of 3 Spitfire Mk. IXb lead by Ft/Lt. Esli Gordon Lapp of Alberta, Canada. Lapp later went on to become a squadron leader and ace. He got his first kill on this mission. I don't know who was piloting the 3rd aircraft. They initiated combat with 3 or 4 FW-190s. I don't know much of the combat except that my father mentioned he was hit in the engine and his wind screen was covered with oil when he decided to bail out. He came down in a farmer's field northwest of Orbec, stashed his parachute in a rocky hedgerow and ran to a farm house about 1/4 mile away. At the farmhouse he swapped clothes with the farmer. Sitting on the stairs inside the house watching the exchange was a young lad of about 6 or 8 years. This was M. Charles Ellewyn, the nephew of the farmer. M. Ellewyn currently lives and operates a bed and breakfast and dairy farm in Port en Bassin and he has a piece of the propeller from my father's aircraft.

From there, my father started to run down a road and was met by a fellow of about 15 and his sister. This fellow was M. Albert Soetard, who I believe is still alive and lives in Orbec. He led my father through a stand of hardwood trees to the edge of the valley of the L'Oribquet River. I believe they were travelling west or southwest toward highway D519. Albert hid my father in a chicken coop and then he went off to contact the resistance. He brought a man who told my father that he knew someone who could help him and in the meantime, they brought him to the Soetard family house which is on D519. Albert's daughter currently lives in the house and with her husband, operates a dairy farm on the left side of D519 as the road heads northwest. When we visited in 2002, Albert took me down a stone bridge over the L'Oribiquet and showed me Brown (German) trout in the river and said he leased his kilometre of stream to a trout club. Albert's mother cooked my father a steak and frites and he said he drank champagne although now we think it might have been cider. Albert's mother also gave him a "scapulaire" (Item of religious belief) to keep him safe. After breakfast, he was returned to the chicken coop until 2 men came and took him into Orbec. He went to the Hotel de Ville and with the escape photos he carried with him, and he was issued an identity card. This all happened before about 9:30 a.m.

From there I believe he walked, rode in a horse drawn wagon and may have rode a bicycle. He was passed off between different guides 3 times on his way to the Lecor farm north of Livarot, arriving after dark. He said he woke up in the morning, and the Lecor children were lined up around the bed looking at him. My father had basic Canadian high school french and he made the effort to try his best to communicate which was very much appreciated by the Lecors. My father got along very well with Paul. I know that he took my father into Livarot for a haircut and also took him along to buy cheese. My father also had his first bad experience with Calvados liqueur which the family thought was hilarious.

I can clearly recall my father telling me when Major Mcleod and 2nd Lt. McIntyre came to the farm. He referred to them as big Mac and little Mac. My father did not speak to them for 3 days. Paul had told him to listen to them and then question them to see if they were legitimate US pilots or should be shot as spies. They were quite surprised to hear him speak english. Jimmy met 2nd Lt. Mcintyre again in 1998 when they were there to attend a memorial for some executed resistance folks.There was also an Aussie squadron leader there who may be the one McLeod mentions in his report. I don't think my father and the major got along very well. The major continuously ordered the Lt. around and he tried to do the same with my father. My father told him he was in the RCAF and was not under the major's command. My father recalled quite clearly one day when the Lecor house was surrounded by German soldiers. The major wanted to get the guns out of the hiding place and prepare to fight. My father told him to let Paul handle it and Paul told the Germans there were no fliers there and they went away. My father was ready to leave on his own until Paul talked him into staying and the major was gone the next day.

I also recall my father mentioning the German sergeant who moved into the house. He took the grandparent's room and bed. Jim said the German used to listen to the BBC on a short-wave radio and they would be upstairs listening also. He was not big on going out to receive the so called equipment drops. He was scared most of the time and was afraid of getting his ass shot off. He came home with post traumatic stress disorder and he would wake up in the night claiming the Germans were chasing him.

I remember him mentioning the 2 paratroopers as the major mentioned in his report. My father did mention that they moved off the farm and were living in a cave up a hill from the Lecor farm. I think the Canadian trooper now lives in Buffalo, New York.

That's pretty well all I can recall. I know he was not really anxious to go back to France as he felt it was just a part of his life and he had lost some many friends. Henriette Lecor (Paul's daughter) moved to Windsor Ontario after the war with her husband and made contact with my father. When Henriette's husband died, she moved back to Normandy and as far as I know still lives in Livarot. She was the main reason he went back in 1998 to go to that memorial dedication and again in 2002. I believe Denise visited with her in 2011. My father also recalled meeting George Tripp on that visit.

Jim survived the war and returned to Toronto, Ontario where he married his teen sweetheart, Jean Glazier. He worked for Canada Customs for 35 years, the last 20 as an investigator. Most of the guys he worked with were bomber crew, mostly RCAF Lancasters.

I was born in 1953 and have 2 wonderful daughters with my wife Jocelyne, Denise in Ottawa and Julie in Victoria. Jim loved them very much and the girls loved to be in his company.

He loved to play golf and watch sports especially baseball and football. He loved to go to the track and bet on the harness racing. He coached and umpired baseball, coached hockey and refereed basketball.

Jim and Jean moved to Lefroy Ontario in 1988, to live in their renovated family cottage on Lake Simcoe. They made friends quickly through the United Church and it was actually the best years of their retirement. Jean still lives in the house at 92."

Aero Legends Spitfire NH341 Code DB-E is being restored and converted to a dual cockpit T9 version by the experts at Historic Flying Ltd (HFL), Duxford - A great contribution to Spitfire history.

Thanks to Lawrence Jeffrey (son) Denise Jeffrey for photograph and narrative - April 2016. We would also like to thank Keith Perkins from Aero Legends who contacted us in August 2016.