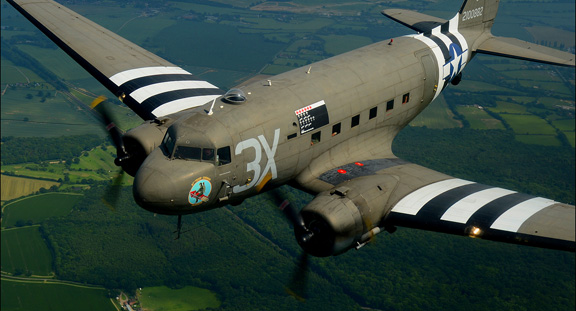 Fly With A D Day Dakota

Arrival
6 June 2019 marks the 75th anniversary of The D-Day Landings – one of the most remarkable Allied wartime operations. What better way to pay your respects than the rare opportunity to Fly With a D Day Dakota from an original RAF grass airfield in Kent during this commemorative year. 160,000 Allied troops stormed the Normandy beaches, beginning the liberation of Western-Europe. Before the beach assault 24.000 troops parachuted or glided in. The most important aircraft supporting the airborne assault were over 800 Douglas C-47 Skytrains (Dakotas) – Drag ’em Oot was one of them.

Aero Legends staff greet you at the Aero Legends main reception and proceed with your check-in. Headcorn Aerodrome has free parking and good facilities. With excellent viewing areas alongside the grass runway, a café and licensed ‘Wings’ bar, we encourage your family and friends to savour the atmosphere and share your day.

Fly With a D Day Dakota guests fly in an ex-RAF 1946 de Havilland Devon, famously used by Air Chief Marshall Sir Basil Embry as his personal transport during his time as Commander Of Allied Forces, Central Europe. In 1985 the aircraft joined the Battle Of Britain Memorial Flight (BBMF) at RAF Coningsby, where the aircraft was used as a crew transport in support of the BBMF Lancaster, Spitfires and Hurricanes. The Devon and its non-military sister the Dove were exceptionally successful, proving reliable and economical in service. They became one of the best selling British aircraft of the 1950’s. The Devon is a comfortable aircraft inside, with roomy seats and large panoramic windows. There are excellent photo opportunities.

In the Air
Soon after take-off you will be thrilled as the immense Dakota draws alongside. The Douglas C-47 Dakota is without doubt one of the most successful and famous aircraft designs in history. It became one of the world’s most famous military transport aircraft. The backdrop is Leeds Castle and the surrounding countryside. You will have a breathtaking vision of Leeds Castle, rising majestically from the moat as it has done for over 900 years.

Ground Viewing
During the event the Dakota requires refuelling and maintenance checks, and at that time we can showcase her to our flying guests who wish to view the aircraft at close quarters, and take those very special close up photographs. The viewings are hosted by staff members, who will answer all your questions about this iconic aeroplane.