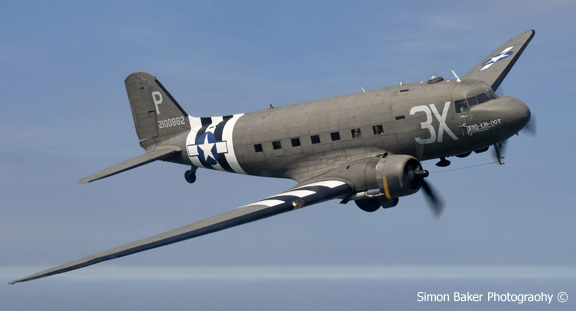 Arrival
6 June 2019 marks the 75th anniversary of The D-Day Landings – one of the most remarkable Allied wartime operations. What better way to pay your respects than the rare opportunity to Fly With a D Day Douglas C-47 Dakota from an original RAF grass airfield in Kent during this commemorative year. 160,000 Allied troops stormed the Normandy beaches, beginning the liberation of Western-Europe. Before the beach assault 24.000 troops parachuted or glided in. The most important aircraft supporting the airborne assault were over 800 Douglas C-47 Skytrains (Dakotas) – Drag ’em Oot was one of them.

Aero Legends staff greet you at the Aero Legends main reception and proceed with your check-in. Headcorn Aerodrome has free parking and good facilities. With excellent viewing areas alongside the grass runway, a café and licensed ‘Wings’ bar, we encourage your family and friends to savour the atmosphere and share your day.

Our Douglas C-47 Dakota c/n 19345, was delivered to the United States Army Air Force on the 28th of December 1943 and had serial 42-100882 assigned. She joined operations with 87th Troop Carrier Squadron based at Greenham Common in England equipped as glider pick up, her crew named her Drag ’em Oot (slang for ‘Drag Them Out’). She participated in the air assault during D-Day when at 00:46 on 06 June 1944 she dropped 18 paratroopers of the US 82nd Airborne Division just behind the Normandy beach heads, near St. Mere Église. She returned safe to the UK and after a second mission that very same day, she started to resupply the troops in France. In September 1944 she was transferred to the RAF, designated a Dakota C.3 and assigned the British serial TS422. Once with the RAF she was assigned to Number 1 Heavy Glider Servicing Unit, attached to 38 Group RAF at Netheravon, Wiltshire. The RAF wanted to have a specialist glider recovery unit and TS422 started recovering Horsa assault gliders from the Normandy beach heads as soon as she joined the RAF. The unit recovered about 40 Horsa’s prior to Operation Market Garden. TS422 herself was just like the Horsa’s she recovered from the Normandy beaches, in action during the biggest para-dropping in history: Operation Market Garden in September 1944. During this mission the pilot must have been severely wounded considering this Dakota was found to have signs of 12 bullet holes on the top of her cockpit and nose; probably caused by being attacked by a German fighter at some point, but this Dakota warbird could take a beating. She was repaired and in August 1945 she joined 435 Squadron of the Royal Canadian Air Force which had just returned from Burma to the UK. After the war ended the Dakota left for Canada, where she served with the RCAF as a trainer, a transport and whilst equipped with skis and jato rockets, as a search and rescue aircraft. After her fruitful military career she ended up in the USA, serving with various civilian companies, being registered as N5831B. She was then grounded for a few years until Paddy Green found her in Arizona upon his search for a C-47 to be restored as a WW2 veteran. Following an inspection (plenty of DC-3 / C-47 hulks around but most are in deplorable shape when inspected thoroughly) she was purchased and prepared to a condition suitable for the long ferry flight back to England. The flight to Liverpool took 7 days and 35 hours flying time, but occurred without any technical problems. Once in the UK she was registered N473DC and repainted in the livery she now appears in: the original markings as worn during her missions on D-Day 1944 with USAAF serial 42-100882 and coded 3X-P, nicknamed Drag ’em Oot (slang for ‘drag them out’) then piloted by Bill Allin. Aero Legends acquired Drag ’em Oot in 2018.

Fly With a D Day Dakota guests fly in an ex-RAF 1946 de Havilland Devon, famously used by Air Chief Marshall Sir Basil Embry as his personal transport during his time as Commander Of Allied Forces, Central Europe. In 1985 the aircraft joined the Battle Of Britain Memorial Flight (BBMF) at RAF Coningsby, where the aircraft was used as a crew transport in support of the BBMF Lancaster, Spitfires and Hurricanes. The Devon and its non-military sister the Dove were exceptionally successful, proving reliable and economical in service. They became one of the best selling British aircraft of the 1950’s. The Devon is a comfortable aircraft inside, with roomy seats and large panoramic windows. There are excellent photo opportunities.

In the Air
Soon after take-off you will be thrilled as the immense Douglas C-47 Dakota draws alongside. The Douglas C-47 Dakota is without doubt one of the most successful and famous aircraft designs in history. It became one of the world’s most famous military transport aircraft. The highlight of this tour is to see the wonderful sight of the Battle of Britain Memorial at Capel-le-Ferne, near Folkestone. Set in the cliff top this 80 metre propeller, with the statue of the Lone Pilot sitting in the middle, is a tribute to The Few who fought so valiantly in the Battle of Britain. As we circle overhead you will enjoy the spectacle of the Dakota flying with you, and the Memorial as the backdrop – a photographer’s dream shot! The spectacular English Channel enhances the whole experience, with the unspoilt beaches evocative of the Normandy beaches she flew above 75 years ago..

Ground Viewing
The Douglas C-47 Dakota requires refuelling and maintenance checks. During static periods we can showcase her to our flying guests who wish to view the aircraft at close quarters, and take those very special close up photographs. The viewings are hosted by staff members, who will answer all your questions about this iconic aeroplane.