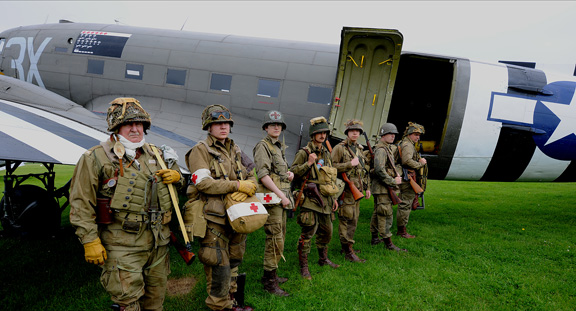 D Day 75
6 June 2019 marks the 75th anniversary of The D-Day Landings – one of the most remarkable Allied wartime operations. What better way to pay your respects than the rare opportunity to tour a D Day Dakota from an original RAF grass airfield in Kent during this commemorative year. 160,000 Allied troops stormed the Normandy beaches, beginning the liberation of Western-Europe. Before the beach assault 24.000 troops parachuted or glided in. The most important aircraft supporting the airborne assault were over 800 Douglas C-47 Skytrains (Dakotas) – this aircraft ‘Drag ’em Oot’ was one of them.

Aero Legends staff will greet you at the Aero Legends main reception and proceed with your check-in. Headcorn Aerodrome has free parking and good facilities. With excellent viewing areas alongside the grass runway, a café and licensed ‘Wings’ bar, we encourage your family and friends to savour the atmosphere and share your day at the aerodrome.

The Ground Viewings are hosted by staff members, who will answer all your questions about this iconic aeroplane. The Viewing lasts up to 10 minutes, including a walk through the inside of the aircraft. If your Ground Viewing date is booked on a ‘Fly With A D-Day Dakota’ tour date, it is likely that you will see the aircraft performing flights in the morning and afternoon of your day.