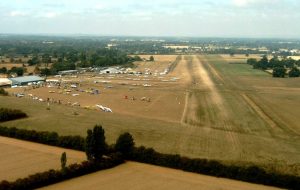 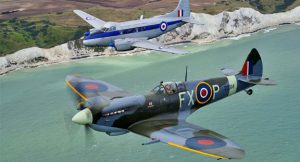 Aero Legends have been operating flight experiences with WWII aircraft from Headcorn Aerodrome since 2014. Its location in the heart of Kent allows passengers to travel through the same airspace in which the Battle of Britain was fought so furiously 75 years previously. Its close proximity to the coast allows for tours of the White Cliffs of Dover and the Battle of Britain memorial at Capel-le-Ferne, which pays tribute to the Few. Other popular landmarks include Leeds Castle, as well as Dover Castle and Dover Harbour, which served as a key feature on the front line of the Battle of Britain being relentlessly attacked by the Luftwaffe.

Headcorn Aerodrome was first used for general aviation in 1927 when the local land owner flew a First World War bomber, a BE2 bi-wing from here with a group of friends. Following the outbreak of World War II the airfield was requisitioned by the Airfields Board in 1942 and prepared for operational service. Originally designated as a light bomber base for Operation Roundup with type designed bomb storage facilities. Two Sommerfeld Track runways were laid, the main one being some 1,600 yards in length, with a secondary runway of 1,400 yards. Tracking and coconut matting were put down to form an all-weather structure that was held down by steel spikes. The RAF named the aerodrome  Lashenden, which was an attempt to confuse the enemy, Lashenden is to the southwest of the field!! RAF Lashenden became a prototype for the temporary Advanced Landing Ground airfields that were built in France after D-Day. 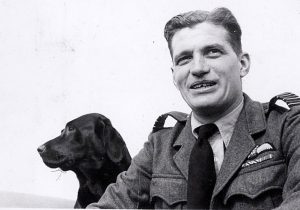 On the 6th of August 1943, 127 Wing Royal Canadian Air Force moved to Lashenden from RAF Kenley. The Wing comprised of 403 and 421 Squadrons flying Spitfire IXb’s under the command of Wing Commander ‘Johnnie’ Johnson CB CBE DSO DFC DL. He finished the war as an RAF ace, destroying 38 German planes. He was the only Englishman in the Canadian Wing, and he led both of the squadrons based there. The Canadians moved out at the end of August and the airfield remained empty until the Americans arrived the following year. 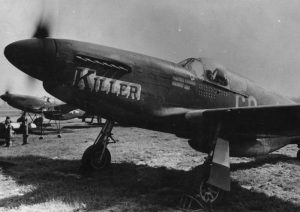 On the 13th of April 1944 the airfield was occupied by the 100th Fighter Wing, 19th Tactical Air Command, 9th Air Force using Shenley House as its headquarters. On the 17th of April 1944 the 354th (Pioneer Mustang) Fighter Group comprising 353rd, 355th and 356th Fighter Squadrons arrived, operating the North American P51B Mustang. There were 3000 ground crew supporting 70 aircraft and one sortie would use over 3,500 US gallons of Avgas. The 354th Fighter Group flew bomber escort missions as far as the Polish border from Lashenden during their stay. The 354th Fighter Group left Headcorn on the 22nd of June 1944 when they moved to A2 at Criqueville on the French coast. Many different planes landed at Lashenden during the war years because of fuel shortages and other problems, including 13 B-17 flying fortresses. The airfield closed on the 22nd of June 1945. With the resurgence of interest in civil aviation in the 1950’s, the airfield was re-opened as a base for private aviation and has been thriving ever since. The airfield is now home to Aero Legends Ltd, several flying schools, a helicopter flying school, a parachute club, a model flying club, an Air Training Corps unit & a balloon flight company. The Lashenden Air Warfare Museum is one of the longest established aviation museums in the country, having been formed in 1970.