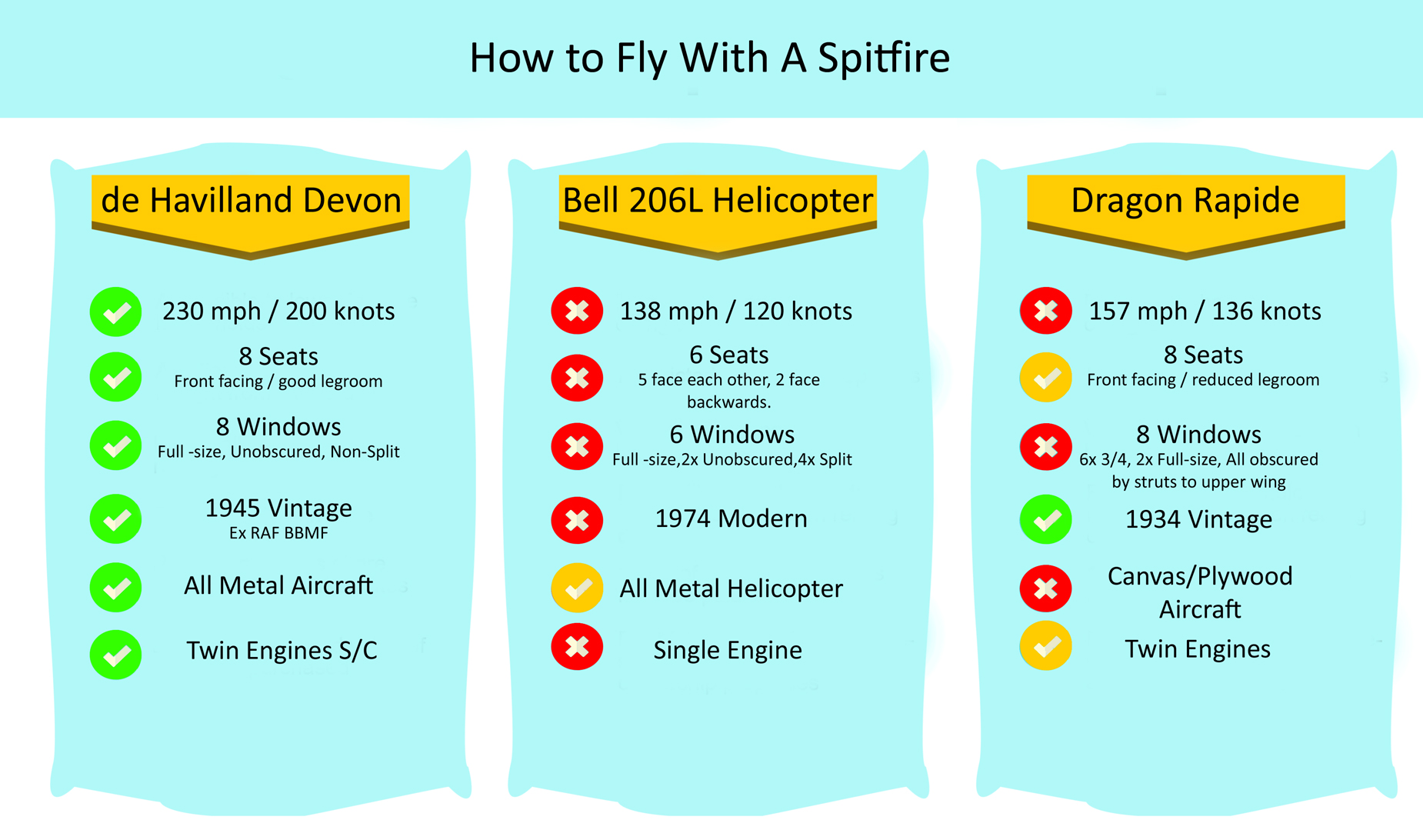 “for the Spitfire to show you its true flying colours and provide perfect photos, you have to fly with it at sufficient speed. Our experiences showed us that the Bell 206L LongRanger helicopter and the de Havilland Dragon Rapide were both too slow. In 2015 we acquired the ex-RAF 1946 de Havilland Devon. Finally, Britain has a vintage passenger aircraft fast enough to fly with a Spitfire.”

Since 2010 Action Stations / Aero Legends have flown nearly 5000 customers alongside a number of Spitfires and WW2 fighter interceptors. We started our Fly With A Spitfire Flights using the Bell 206L Longranger Helicopter. We then began using fixed wing aircraft such as the de Havilland Dragon Rapide. Each change gave us more speed, but it became apparent that we would need a minimum cruising speed of around 130 knots (150 mph) to give the Spitfire / Hurricane a comfortable flying speed and ‘clean’ flying – without flaps.

Our Spitfire HF IX with its Merlin 70 is capable of a true speed of 329 mph at sea level or 413 mph at 30,000 ft. It was designed to manoeuvre well for fighting at its cruising speed of 220 mph to its maximum speed. Quite simply, for the Spitfire to show you its true flying colours and provide perfect photos, you have to fly with it at sufficient speed. Our experiences showed us that the Bell 206L LongRanger helicopter and the de Havilland Dragon Rapide were both too slow.

Looping – speed should be about 300 mph but may be reduced to 220–250 mph when the pilot is fully proficient.


Rolling – speed should be anywhere between 180 and 300 mph. The nose should be brought up about 30 degrees above the horizon at the start, the roll being barrelled just enough to keep the engine running throughout.

In 2015 we acquired the ex-RAF 1946 de Havilland Devon, famously used by Air Chief Marshall Sir Basil Embry as his personal transport during his time as Commander Of Allied Forces, Central Europe. The aircraft is powered by two de Havilland Gipsy Queen 70-3 supercharged inverted six cylinder in-line engines driving three blade constant speed propellers. The development team for the Devon (Dove was commercial name) was headed by Ronald Eric Bishop, the creator of the de Havilland Mosquito and was conceived as a replacement to the pre-war de Havilland Dragon Rapide.

Finally, Britain has a vintage passenger aircraft fast enough to fly with a Spitfire.

The Devon is a comfortable aircraft inside, with roomy seats and large panoramic windows next to each passenger. The rectangular windows are non-split and offer unrivalled, unobstructed views outside for every passenger. Another bonus from the large windows is that from where you sit you can follow the Spitfire to the other side of the aircraft, using a telephoto lens you can shoot through other passenger windows without getting them in the frame. You will be delighted to see you have enough room on your lap and around your feet to arrange your bags to get each camera ready for immediate use. The Devon is a British short-haul airliner, from pre-budget airline times when only the high ranking or rich could fly, thus comfort and personal space is an important feature throughout.

Flying in the Devon is a true vintage RAF flight experience in itself. Its re-assuring full metal construction, beautiful RAF livery and Dove shape remind you of an important historical past stretching back to 1946 post-war Britain. In 1985 the aircraft joined the Battle Of Britain Memorial Flight (BBMF) at RAF Coningsby, where the aircraft was used as a crew transport in support of the BBMF Lancaster, Spitfires and Hurricanes.
The Devon and its non-military sister the de Havilland Dove were exceptionally successful, proving reliable and economical in service. They became one of the best selling British aircraft of the 1950’s.

For our Fly With A Spitfire guests, soon after take-off you will be thrilled to see the Spitfire, Hurricane or other heritage aircraft draw alongside, and marvel at the clear views of the legendary fighters! You will experience something of what one of the ‘Few’ would have seen and felt back then, in the moments after the scramble, forming up for the long climb into battle, your well matched, supercharged engines synchronised with each other.
The sight takes your breath away. Imagine yourself as a young pilot at the time – what emotions he must have felt in the moments before he flung his machine into battle. From the comfort of the de Havilland Dove, the sight of our Spitfire drawing alongside takes you back to those days – it’s almost as if you are flying in The Battle of Britain!